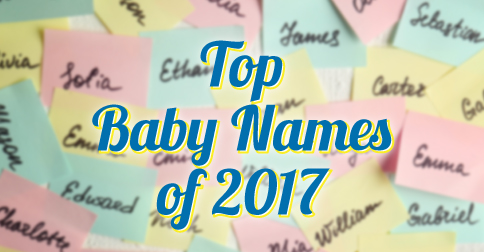 Choosing a name for your baby can be an exciting–and stressful–time. Some parents will rely on family names and traditions such as a beloved grandparent or a first son carrying on dad’s name. Other parents will look toward what’s trending–and then choose a name that’s not. Others will consult our list of popular names and find one that resonates with their family and culture but perhaps give it a unique spelling or pairing with a middle.
As you begin to narrow down names for your sweet bundle of joy, let these popular names from 2017 jump-start your thoughts. Practice saying the name aloud to see how it resonates. Imagine yourself calling it from the porch or down the hall, and add it to the list of other kids’ names you can rattle off without pause. Does it flow? Skip a beat? Before long you’ll find just the right name with just the right sound for the baby that’s just right for your family.

According to BabyCenter, Sophia is still the princess on top, while Jackson (or Jaxon) reigns supreme for boys. Olivia and Liam, Emma and Noah round out the top three for this polling of over 50,000 parents.
Huffington Post reported that in the first half of 2017, Olivia was on top for baby girls, followed closely by Amelia, Charlotte, Isla, and Isabella. Celeste debuted on this list, and Evelyn trended as it climbed the ranks more than any other girls’ name. Huff says Asher was the most popular boys’ name they found with Atticus, Jack, Ezra, and Theodore making the top five. But their list claimed over a fifth of the boys’ names were new and included such choices as Charlie, Everett, and Rhett.
Mom365 updates their list of popular baby names daily. The current list’s top five seems to coincide with Baby Center. Ava, Elijah, Logan, and Mia are currently in the top ten. Their final boys’ top ten for 2017 also included Mason, James, Aiden, Ethan, Lucas, and Jacob. For girls, the top ten included many already mentioned with Abigail and Emily also making the cut.
When Nameberry claimed Atticus took the top spot for boys this year, they also noted parents are “moving away from family names and traditional male choices and judging boys’ names the same way they do girls’, with style the driving factor.” Their top ten list also included newcomers Jasper and Henry. For girls, Olivia was top pick again, but Cora, Amara, Aurora, and Maia also made the list. Perhaps popular television shows like Once Upon a Time influenced many parents’ choices.
What will the 2018 trends be? Look toward the royals, the World Cup, and popular movies to influence choices. Parents seem to be leaning away from strictly girl or boy names and embracing style as a guiding factor. However, they are also choosing names that embody strong characteristics of leadership and demonstrate seriousness. Some are even looking at names as a factor in college acceptance. No matter what you choose, what matters in the end is raising a child who embodies characteristics and values that make you proud.