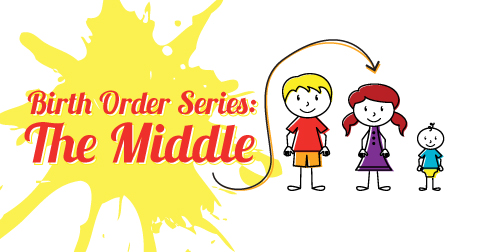 Being a middle child comes with its own set of “expectations.” Some say the middle is the hardest, the left behind child who acts out for attention. Others argue middle children are easygoing and peacemakers. Their place in the birth order forces them “to build bridges to other sources of support”, teaching them excellent people skills.
“Once a role is filled by the firstborn, the second-born will seek out a role that’s completely the opposite,” Dr. Kevin Leman, a psychologist and the author of The Birth Order Book: Why You Are the Way You Are (Revell) and The First-Born Advantage, says in Parents Magazine. Middle children are difficult to categorize, he says, because their traits are a play off the firstborn. For instance, they are often thought to be rebellious–but typically oldest children are rule followers, so your second born is seeking something different. If you’re older child is extroverted, your middle will likely retreat as an introvert. If an older sibling is successful at an activity, likely your middle child will seek an opposite activity to find success (and attention).
Some characteristics of middle children include:

When parenting, it is important to give each child individual attention, but this is especially significant for middle children. They are often aware they are in a position to never have their parents all to themselves the way an oldest did prior to their birth or a youngest will once the others have moved out. As you spend individual time with each of your children, take special care to do this consistently with your middle child.
For a little fun fact, famous middle children include Bill Gates, Madonna, Donald Trump, Martin Luther King, Jr and JFK.
Don’t miss our other posts in this Birth Order Series.
The Oldest Child
The Youngest Child
The Only Child