Fun Facts About San Antonio to Teach Your Kids

Fun Facts About San Antonio to Teach Your Kids 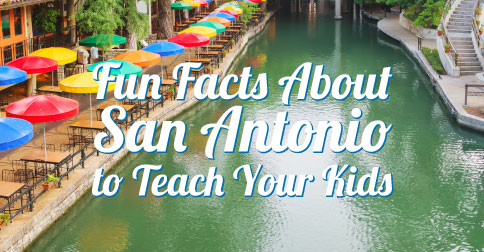 If you’re reading this, chances are you live in or near San Antonio. Know matter how well you know the city, we think a few of these San Antonio facts might surprise you. Even if none of these fun facts are new to you, they’ll definitely interest your kids!

San Antonio holds the Guiness World Record for most tamales made in a 12-hour period. Lanier High School students and friends made 17,106 tamales in 10 hours! Who’s hungry now?
Every year, San Antonio hosts a parade with floats that actually float. The Texas Cavaliers River Parade features musical and festive parade floats, which float down the San Antonio River. If you’ve never participated in this party before, be sure to mark your calendars for April 22, 2019.
Texas’ very first historic district is in San Antonio. King William Historic District is an elegant, German neighborhood located in downtown San Antonio.
San Antonio has a lot of nicknames. You’ll hear it referred to as the Alamo City, Mission City, River City, and Stone City, to name a few.
San Antonio is home to the nation’s first all-digital library. That’s right! Bexar County’s BiblioTech is filled with ebooks and digital resources for San Antonio residents to enjoy. Don’t have an e-reader? Don’t worry… you can borrow one from the library!
It’s the most visited city in Texas. Over 34 million people visit San Antonio every year.
The oldest cathedral in Texas is located in San Antonio. Dating back to 1738, San Fernando Cathedral still holds services every weekend.
The inventor of Gatorade, Robert Cade, was born in San Antonio. So next time you’re enjoying a refreshing Gatorade on one of our hot summer days, you know who to thank.
The world’s largest bat colony lives just outside of San Antonio. An estimated 15 million bats live in Bracken Cave from March to October. You can even visit and watch the bats emerge at dusk every day.
So, did you learn something new about San Antonio? We sure did! Share your favorite San Antonio facts with your kids to help them learn a little bit more about their home.